How to cope with acute stress disorder? 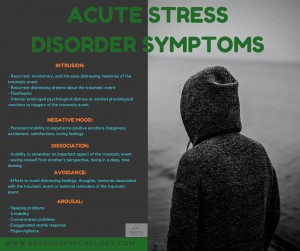 The first symptoms of acute stress disorder (ASD) can appear within a few days after experiencing a traumatic event and have a disruptive effect on daily activities. Concentration problems, the inability to experience positive emotions, recurrent distressing dreams about the event, and irritability are common symptoms of ASD. Coping with acute stress disorder is important in the short run (because it reduces the ASD symptoms [1],[2],[3],[4] and improves the quality of life [5]) and in the long run (because it helps prevent PTSD from developing [1],[2]). Fortunately, coping with acute stress disorder can be done at home and without professional help as long as the ASD symptoms are not too severe. If you are interested in the severity of your symptoms, please take the ASD test.

At Barends Psychology Practice acute stress disorder treatment is offered (also online). Go to contact us to schedule a first, free of charge, first session. (Depending on your health insurance, treatment may be reimbursed).

A traumatic event is characterized by the exposure to a life threatening situation, serious injury or sexual violence. Such an experience is extremely upsetting and damages the brain. A growing body of evidence suggests that the brain is significantly affected after someone experiences a traumatic event and develops PTSD or shows signs of PTSD:

Damage to the brain could explain certain ASD symptoms, such as concentration problems, nightmares, irritability, negative mood, and intense/prolonged psychological distress. Efforts to avoid distressing feelings, thoughts, and memories associated with the traumatic event could be explained as a protection mechanism of the brain to prevent more damage. Unfortunately, avoidant coping is associated with greater PTSD symptoms (and thus ASD symptoms) [11],[12],[17] compared to active coping [12]. Active coping includes strategies such as problem-solving, cognitive restructuring, emotional expression and eliciting social support.
In other words: developing ASD symptoms after experiencing a traumatic event are more common than one may think, and could partially be explained by brain damage. Fortunately, research shows that effective coping with acute stress disorder can reduce the severity of the ASD symptoms.

There are a few things you can do to reduce the impact ASD symptoms have on you. Some of these things may feel counterintuitive, others may take a while before you notice a difference, but their effectiveness is supported by literature. People who start coping with acute stress disorder soon after the traumatic event experience control and power over their symptoms and themselves, whereas feelings of helplessness are being reduced [13].