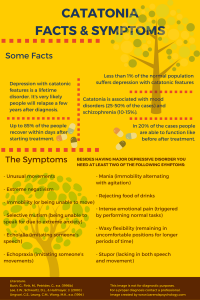 At Barends Psychology Practice depression is treated. Schedule your first, free of charge, session now. Go to contact us. (Depending on your health insurance, treatment may be reimbursed).

What is catatonic depression?

Although the exact cause is unknown, experts believe that an imbalance of neurotransmitters (dopamine, GABA and glutamate) in the brain may at least partially cause this type of depression. An imbalance of neurotransmitters in the brain usually affects behaviour.
Other experts say it might be the result of an excessive fear response. When there is danger people respond in 3 ways: they Fight, Flee or Freeze. Catatonia is associated with an excessive Freeze response. As a result of this Freeze response all emotions and movements are switched off or temporarily frozen. In nature you see this response a lot in animals and insects. If you approach a spider its first response is to sit still hoping you won’t notice it.

There are two ways to treat catatonic depression.