How to deal with PTSD

How to deal with PTSD? 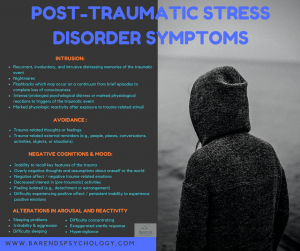 A common question people ask themselves after experiencing a traumatic event is: “how to deal with PTSD symptoms?”. The answer to this question is not as difficult as it seems.
Post-traumatic stress disorder (PTSD) has a disruptive effect on the daily lives of its victims. If left untreated, people continue to suffer from PTSD symptoms [18],[19] and have low Quality of Life scores [18] years after the traumatic experience(s). Also, untreated PTSD has a negative effect on social (relationship, isolation) and occupational functioning (current and future occupational opportunities) [20]. Despite the worldwide attention to PTSD and its effects, most people still do not receive PTSD treatment [21]. How to deal with PTSD myself, therefore, is a common question these days.
PTSD treatment (and in some cases self-help) reduces the severity of (some of) the PTSD symptoms [1],[2],[3],[4], and improves the Quality of Life [5]. Focusing on each of the PTSD symptoms, this page aims to answer the question: How to deal with PTSD? The tips and strategies on this page are more effective for those people who suffer from moderate to mild PTSD symptoms. People suffering from complex PTSD (Type II) or more traumatic events benefit much more from professional help. If you want to know how much you are suffering from PTSD symptoms, please take the PTSD quiz.

At Barends Psychology Practice, we treat post-traumatic stress disorder online and in person. Book your first, free of charge, session now. Go to Contact us. (Depending on your health insurance, treatment may be reimbursed).

How to deal with PTSD – understanding why people suffer from PTSD symptoms.

Someone who experienced a traumatic event has been exposed to a life threatening situation, serious injury or sexual violence. Examples of famous traumatic events are: the Vietnam war, the rapes of the East Area Rapist/Original Night Stalker, the 9/11 attacks, and traffic accidents such as the ones in São Paolo, Brazil (Rodovia dos Imigrantes highway, involving 300 vehicles), Braunsweig, Germany (Autobahn A2, 259 vehicles), and Los Angeles, USA (Freeway 710, 216 vehicles). A traumatic event can also involve a robbery, public humiliation, bullying or a break-up.
Not every traumatic experience causes the same response in people. And not everyone responds the same to the same traumatic event. Yet, researchers found the same group of symptoms in the majority of people who developed PTSD, and it is likely that these symptoms are at least partly caused by (temporary) damage to the brain. Research found smaller volumes of the hippocampus [6],[7],[9], lower volumes of grey matter in amygdala, insula, medial prefrontal cortex [9], and anterior cingulate [9],[10], and enhanced right amygdala responses [8] in people with post-traumatic stress disorder, compared to people without PTSD. These damages to the brain resulted in poorer performance on verbal memory tasks, and more symptoms of dissociation, anxiety and depression.
Apart from the result of brain damage, dissociation (avoidant coping) could also be a way of the brain to protect oneself from more damage. Unfortunately, avoidant coping is associated with greater PTSD symptoms [11],[12],[17] compared to active coping [12].
In other words: experiencing a traumatic event causes damages to the brain, which results in the development of PTSD symptoms. Fortunately, research shows that effective coping with PTSD can reduce the severity of its symptoms, which provides us with an answer to the question: how to deal with PTSD? The following paragraphs will focus on strategies that make it easier for people to deal with PTSD.

How to deal with PTSD – reducing PTSD symptoms.

There are 4 groups of PTSD symptoms: intrusion, avoidance, negative cognitions & mood, and alterations in arousal and reactivity. For each group techniques on how to deal with PTSD will be discussed.

(Advertisement. For more information about how to deal with PTSD, continue reading.) 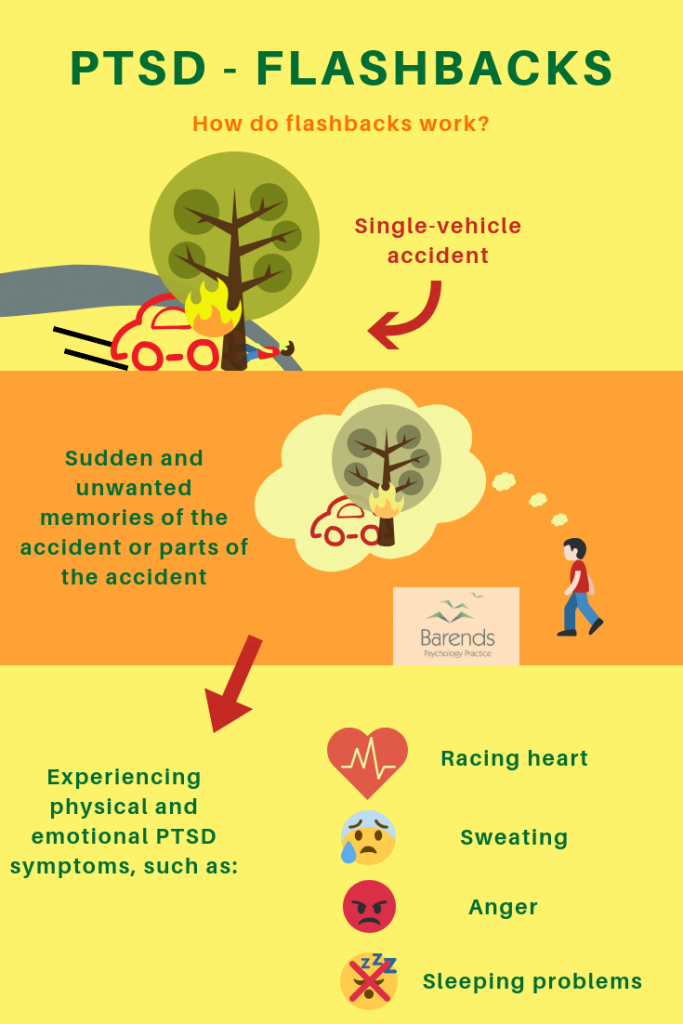 The DSM V PTSD criterion intrusion contains the following symptoms: nightmares, intrusive thoughts, dissociative reactions, intense or prolonged distress, and marked physiologic reactivity. To reduce the impact of these symptoms on your daily functioning, you can apply the following techniques:

How to deal with PTSD? The intrusion symptoms can best be reduced by keeping yourself occupied, talking to friends and family, and by keeping a healthy rhythm.

The DSM V PTSD criterion avoidance contains the following symptoms: avoidance of trauma-related thoughts or feelings or trauma-related external reminders (e.g., people, places, conversations, activities, objects, or situations). To reduce the impact of these symptoms on your daily functioning, you can apply the following techniques:

How to deal with PTSD? The avoidance symptoms can best be reduced by interpreting trauma-related thoughts, feelings, and trauma-related external reminders in a challenging way rather than in a negative way. Also using friends and family (as a safety item or distraction) to face (external) reminders of the traumatic event can help you reduce the impact avoidant symptoms have on you.

(Advertisement. For more information about how to deal with PTSD, continue reading.)

The DSM V PTSD criterion negative cognitions and mood contains the following symptoms: Inability to recall key features of the trauma, overly (and often distorted) negative thoughts and assumptions about oneself or the world, exaggerated blame of self or others for causing the trauma event or for resulting consequences, negative affect, feeling isolated, difficulty experiencing positive affect, and decreased interest in (pre-traumatic) experiences. To reduce the impact of these symptoms on your daily functioning, you can apply the following techniques:

How to deal with PTSD? The negative cognitions and mood symptoms can best be reduced by religious and spiritual coping, and by spending time with friends and family.

Alterations in arousal and reactivity

The DSM V PTSD criterion alterations in arousal and reactivity contains the following symptoms: Irritability or aggression, risky or destructive behavior, hypervigilance, heightened startle reaction, difficulty concentrating, and difficulty sleeping. To reduce the impact of these symptoms on your daily functioning, you can apply the following techniques:

How to deal with PTSD? The arousal and reactivity symptoms can best be reduced by distraction, a healthy rhythm, and good communication with friends and family.

Talk to a therapist

For some people it is too difficult to reduce their PTSD symptoms on their own. For these people it is important to reach out to a professional therapist for PTSD treatment. At Barends Psychology Practice, we offer a first, free of charge session to discuss your issues and to set up a treatment plan.