What is psychotic depression? 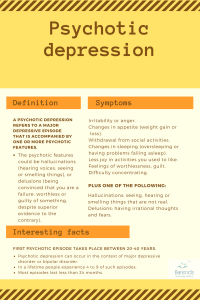 A psychotic depression refers to a major depressive episode that is accompanied by one or more psychotic features. The psychotic features could be hallucinations (hearing voices, seeing or smelling things), delusions (being convinced that you are a failure, worthless or guilty of something, despite superior evidence to the contrary). Half of these people experience more than one delusion. People with psychotic depression usually have depression related delusions or hallucinations. They often think that others can hear their thoughts, or that their thoughts are actually someone else’s thoughts. Despite the fact that most of them know that their thoughts are not true, they may be embarrassed and try to hide them.

They also experience at least one of the 2 features mentioned below:

Note: it is possible for someone to experience positive delusions/hallucinations. In these cases people may have a feeling that everybody is in love with them or likes them. They may be convinced they are secretly being visited by celebrities or that they invented certain things.

Little research has been conducted to the effects of PTSD treatment in people with psychotic depression, because there is an unfounded fear that PTSD treatment may increase the amount and severity of psychotic episodes. Van der Gaag conducted a pilotstudy to the effects of EMDR (PTSD treatment) on psychotic episodes in people diagnosed with Schizophrenic disorder. The results show a significant reduction of the amount of psychotic episodes and a significant reduction on the intensity of each psychotic episode. The results from this study are very promising!
Usually a combination of anti-psychotic medication and antidepressants are used to treat psychotic depression. Another treatment method is electro-convulsive therapy (ECT). However, electro-convulsive therapy is very controversial, because it can be very painful (some people experience it as torture).
Both medications and ECT focus solely on reducing the symptoms, instead of treating the root of the problem.