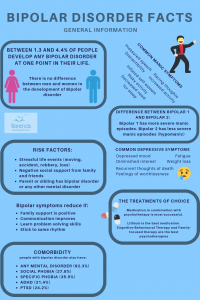 What is bipolar disorder?

Fortunately, bipolar disorder is treatable and with the right type of counseling, the severity of the symptoms can be reduced and a healthy and normal life can be maintained.

At Barends Psychology Practice, we offer counseling for bipolar disorder. Schedule a first, free of charge, session now, go to: contact us. (Depending on your health insurance, treatment may be reimbursed).

Mania – The elevated mood is called a mania, or hypomania (depending on the severity). The bipolar disorder symptoms during mania make people feel euphoric, full of energy, and sometimes irritable. They are impulsive in their decisions (they don’t think of the consequences) and sleep little.

Depression – The bipolar disorder symptoms during periods of depression are characterized by feelings of sadness, anxiety, guilt, hopelessness, and isolation. People often loss interest in activities they like, report changes in sleep and appetite, loneliness, and feel indifferent.

Mixed affective episodes – During such episodes people experience Mania and Depression at the same time. During such periods there is an increased risk of suicide, because depressive emotions are often accompanied by impulsiveness.

Bipolar types: I, II and cyclothymia.

There are four main types of Bipolar disorder (BD): type I, type II, cyclothymia, and Not Otherwise Specified.

Bipolar Type I is characterized by at least one full-blown manic episode lasting at least one week. The bipolar disorder symptoms are severe enough to disrupt the patients ability to work and function socialize. Hospitalisation sometimes in required to prevent harm to themselves or others.

Bipolar Type II is less severe than type I. Although you can have an elevated mood and changes in your functioning, you are able to carry out daily tasks. People with type II experience longer depressive episodes than manic episodes. 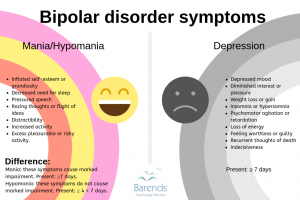 The manic, hypomanic, and depressive episodes contain contradicting bipolar disorder symptoms which can be quite confusing. Someone who experiences a depressive episode, for example, may lack energy, prefers sleeping throughout the day, and may not enjoy most of the daily activities. Someone who experiences a manic episode, however, may feel energetic, happy, and does not need to sleep (much) at all.
For some people it is easier to look at the symptoms per episode to determine whether it was a depressive, manic or hypomanic episode. Therefore, we’ve created an overview of the symptoms categorised according to episodes.

Depressive episode:
There are 3 criteria to keep in mind:

Manic episode:
There are 3 criteria to keep in mind:

Hypomanic episode:There are 4 criteria to keep in mind: 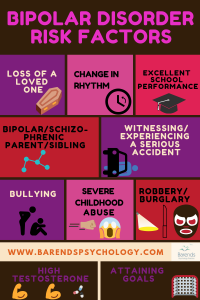 Stressful life events:
Experiencing a stressful life event, such as moving away, losing a significant person, an accident, robbery or being bullied increases the chance of developing bipolar disorder [9]. If someone loses his mom before the age of 5, for instance, there is a significantly increased chance of developing bipolar disorder and even at an earlier age [10]. Losing a mother can have a huge impact on the emotional development of a child.

One of the most interesting facts may be that individuals with excellent school performance are 4 times as likely to develop bipolar disorder compared to those who perform average or below average. At the same time, people with the poorest grades were also moderately more at risk of developing bipolar disorder [22]

We’ve gathered interesting bipolar disorder facts from around the world and categorized them in different categories. Did you know that BD is not related to sex, family income or race/ethnicity [1],[6] or that people with BD have more bed-rest days due to emotional problems compared to people with other mental disorders [3]? Interestingly, one of the Bipolar disorder facts states that BD is responsible for more disability-adjusted life-years than cancer, epilepsy, and Alzheimer disease [5]. Another one of the Bipolar disorder facts is that one in four people with BP-1 or Any Bipolar Disorder report a history of suicide attempts compared to one in five with BP-2 [5],[7].

At Barends Psychology Practice, we offer counseling for bipolar disorder. Schedule a first, free of charge, session now, contact us. (Depending on your health insurance, treatment may be reimbursed).

Between 0.4 and 1% of adults experiences Bipolar disorder 1 at one point in their life; 0.8% of men and 1.1% of women [1],[2]. Some countries report 0.1% of their population, but they used different criteria. Interestingly, some studies report no gender differences in people with bipolar disorder [19].

The age of onset for BP1 is 18.2 years: in retrospect people with BP-1 experienced either a manic/hypomanic or major depressive episode at 18.2 years [1].

People with BP-1 reported an average of 10.3 years in episode (manic/hypomanic/major depressive episode) [1].

For Bipolar disorder 2, the age of onset is 20.3 years: in retrospect people with BP2 experienced either a manic/hypomanic or major depressive episode at 20.3 years [1].

On average, people with BP-2 are in episode for 11.6 years (manic/hypomanic/major depressive episode) [1].

Research suggests that life events that disrupt the circadian rhythm or daily social rhythms more often predict mood episodes (depression, manic or hypomanic) compared to life events that do not disrupt the circadian or daily social rhythm [9]. During Ramadan, for instance, Muslims with BD more often experience an episode compared to the period outside Ramadan [9].

Goal striving or goal attainment is associated with experiencing manic/hypomanic episodes [9]. The theory behind these bipolar disorder facts is that people with BD respond with extreme positive effect, high energy, and motivation to events that involve high incentive motivations and goal striving. At the same time, people respond with extreme negative effect, anhedonia, and low energy to situations involving uncontrollable loss and failure [9].

Problem solving skills, better communication, and psycho-education reduce the effects of BD and the chances of a relapse [9].

The chance of developing bipolar Disorder increases 13.63-fold when a sibling or parent has BD or another mental disorder [10].

Losing a mother before age 5 is also associated with increased chances (4.05-fold) of developing BD [10].

Research suggests that Bipolar disorder is a polygenic disease influenced by many genes that each contribute a little bit [11].

The suicide rate is 25 times higher for people with Bipolar disorder compared to the normal population [17]. Suicidal behaviour almost exclusively occurs during a depressive episode [17].

Lithium has been the drug of choice for decades for the treatment of Bipolar disorder. Lithium is a mood stabilizer [12] and helps most of the bipolar disorder symptoms to reduce or disappear. Lithium and the anticonvulsant lamotrigine are the only two medications for which long-term efficacy has been established in at least two placebo-controlled studies [13].

Psychotherapy is most likely not effective during a manic episode, because of insufficient insight or rejection of help [15].

[20] Kessing, L. V., & Andersen, P. K. (2004). Does the risk of developing dementia increase with the number of episodes in patients with depressive disorder and in patients with bipolar disorder?. Journal of Neurology, Neurosurgery & Psychiatry, 75, 1662-1666.