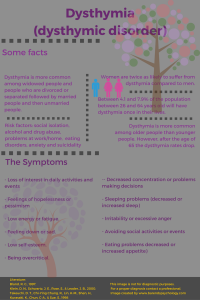 Between 4.1 and 7.9% of the population between 26 and 64 years old will have dysthymia once in their lives. Women are twice as likely to suffer from dysthymia compared to men. Also, this disorder is more common among older people than younger people. After the age of 65 this disorder is less common, probably because of retirement. Dysthymia is more common among widowed people and people who are divorced or separated followed by married people and then unmarried people.

At Barends Psychology Practice, depression is being treated. Contact us for a first, free of charge, session. (Depending on your health insurance treatment costs may be reimbursed).

A. During a majority of days for two years or more, the adult patient reports depressed moods or appears depressed to others for most of the day.

B. When depressed, the patient has two or more of:

C. During this two-year period, the above symptoms are never absent for more than two consecutive months.


D. During the duration of the two year period, the patient may have had a perpetual major depressive episode.

E. The patient has not had any manic, hypomanic or mixed episodes.

F. The patient has never fulfilled the criteria for cyclothymic disorder.

G. The depression does not exist only as part of chronic psychosis.

H. The symptoms are often not caused directly by a medical illness or by substances, including drug abuse or other medications.

I. The symptoms may cause significant problems or distress in social, work, academic, or other major areas of life functioning.

Just as with a depressive disorder, it is not entirely clear what causes dysthymia. Biochemical changed may have occurred in people with dysthymic disorder, but further research is needed on this point. Genetically, it is more common in people whose immediate family members have dysthymic disorder (think of biological (grand)parents or siblings). Environment may also affect the onset of dysthymia. Someone may have to deal with difficult situations causing worry or stress (think of the loss of a loved one). In addition, social isolation increases the risk of dysthymic disorder, but also alcohol- and drug abuse, problems at work or at home, anxiety, eating disorders and suicidality. Personality may also play a part in the onset of dysthymia, especially in case of dependent personality disorder. People who are very dependent on others, seek for approval etc. can suffer from the symptoms of dysthymia if that person does not get approval.

There are two types of treatment for Dysthymic disorder: medication and seeing a therapist/psychiatrist. In regards of medication, doctors or psychiatrist prescribe SSRI’s, SNRI’s and TCA’s. For more information about medication and seeing a therapist, please read treating depression. At Barends Psychology Practice, online counseling sessions are being offered for people with Dysthymia.