What are the Agoraphobia symptoms? 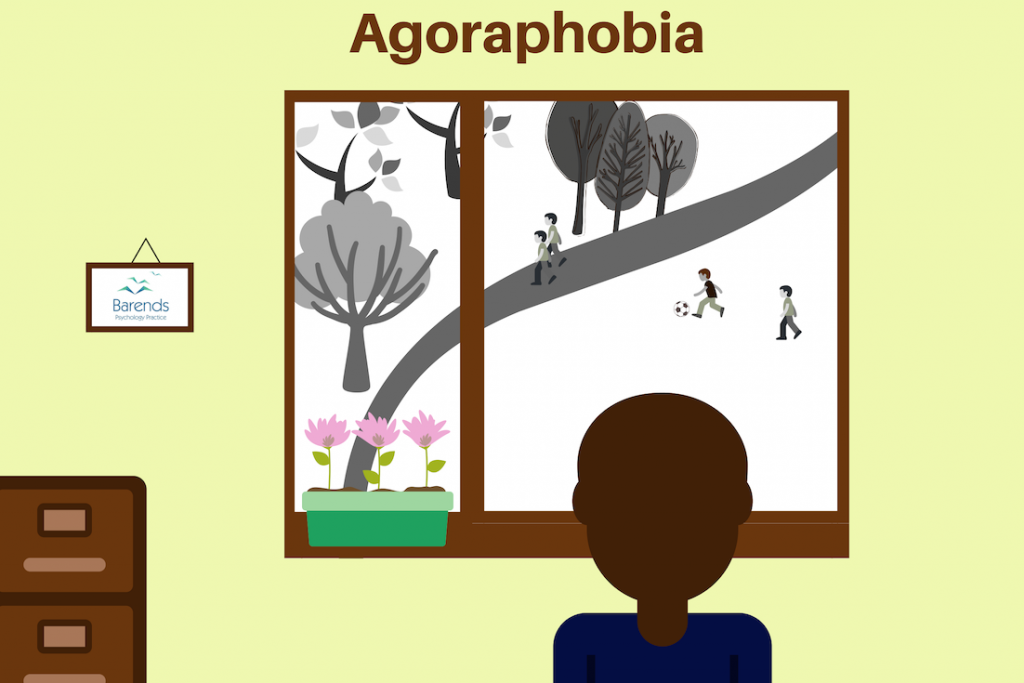 Agoraphobia is an anxiety disorder characterized by a fear of open, enclosed or crowded spaces. This fear is out of proportion to the actual danger posed by the agoraphobic situation and is persistent. Due to the fact that many Agoraphobia symptoms are also common in other mental disorders, the Agoraphobia diagnosis is often missed. A fear of shops, cinemas or planes could also be explained as a specific phobia, panic disorder or post-traumatic stress disorder.
Typically, Agoraphobia symptoms become more severe over time and often lead to more (socially) withdrawn behaviour. Someone with Agoraphobia will try to avoid situations that cause intense fear and anxiety, which limits them in their daily functioning. By avoiding certain locations or situations the fear increases and often generalizes to more (similar) situations and locations which limits them even further. People with severe Agoraphobia suffer so much and so quick from their Agoraphobia symptoms, that it may be impossible for them to leave their own house. In the image on the right or above, someone with severe Agoraphobia only feels safe at home; the outside world causes them to experience a lot of fear and anxiety.
This page discusses all of the DSM 5 Agoraphobia symptoms and explains how to interpret them.

At Barends Psychology Practice, we offer (online) therapy for agoraphobia. Contact us to schedule a first, free of charge, online session. (Depending on your health insurance, treatment may be reimbursed).

The first Agoraphobia criterion focuses on situations: Marked fear or anxiety about two (or more) of the following five situations:

If someone only experiences marked fear or anxiety in theaters and shops, then this person does not meet this criterion, because both shops and theaters belong to the criterion about enclosed spaces.

The second criterion focuses on escape possibilities: The individual fears or avoids these situations because of the thoughts that escape might be difficult or help might not be available in the event of developing panic-like symptoms or other incapacitating or embarrassing symptoms such as fear of falling in the elderly or fear of incontinence.
One of the Agoraphobia symptoms concerns the possibility of escape when needed. Being able to escape or avoid the above mentioned situations significantly reduces fear and anxiety which make it easier for them to be in the situation. If, however, escape is difficult or impossible, then someone with Agoraphobia experiences a lot of fear and anxiety (afraid of panic-like or embarrassing symptoms).
Being in a crowded shopping mall or street, for instance, may give someone with Agoraphobia the feeling that escape is very difficult. The idea that escape may be difficult increases the perceived anxiety and panic-like symptoms which in turn increases the desire to escape. The Agoraphobic person may want to go away, but finds this difficult which could cause some panic-like symptoms. This negative experience will increase the desire to avoid similar situations in the near future.

Criterion C focuses on fear or anxiety: the Agoraphobic situations almost always provoke fear or anxiety. This criterion makes it easier to distinguish between situations and events. Experiencing panic-like symptoms during a flight with a lot of turbulence is understandable and does not mean that this person suffers from either Agoraphobia or a specific phobia. Experiencing panic-like situations during almost every flight, however, indicates that you are afraid of flying or enclosed spaces. Almost always being afraid of other means of transportation points to one of the Agoraphobia symptoms.

Criterion D focuses on avoidance. Avoidance is one of the most common of Agoraphobia symptoms, because it is the most natural response to fear: to avoid the situation or to endure it with intense fear or anxiety.
The agoraphobic situations are actively avoided, require the presence of a companion, or are endured with intense fear or anxiety.
It is not always possible to avoid agoraphobic situations. At one point, people need to go to the grocery store or post office, take the car, bus or train or cross a bridge. The anxiety or fear agoraphobics feel is so intense that they experience physical symptoms like heart palpitations, sweating, nervousness, feeling on edge, and so on. If possible, the easiest is to avoid every agoraphobic situation possible or to take a friend or object with them to help them get through the feared situation. Both friend and object are a safety object: something that calms them down. By focusing on the friend or object they cannot focus too much on their own anxiety and physical symptoms.
It is also possible for agoraphobics to avoid certain locations during rush hour. If the reason is anxiety related, then it is safe to attribute this to Agoraphobia or perhaps social or specific phobia. If the reason to avoid certain locations during rush hours has nothing to do with fear, then it is most likely not phobia related. 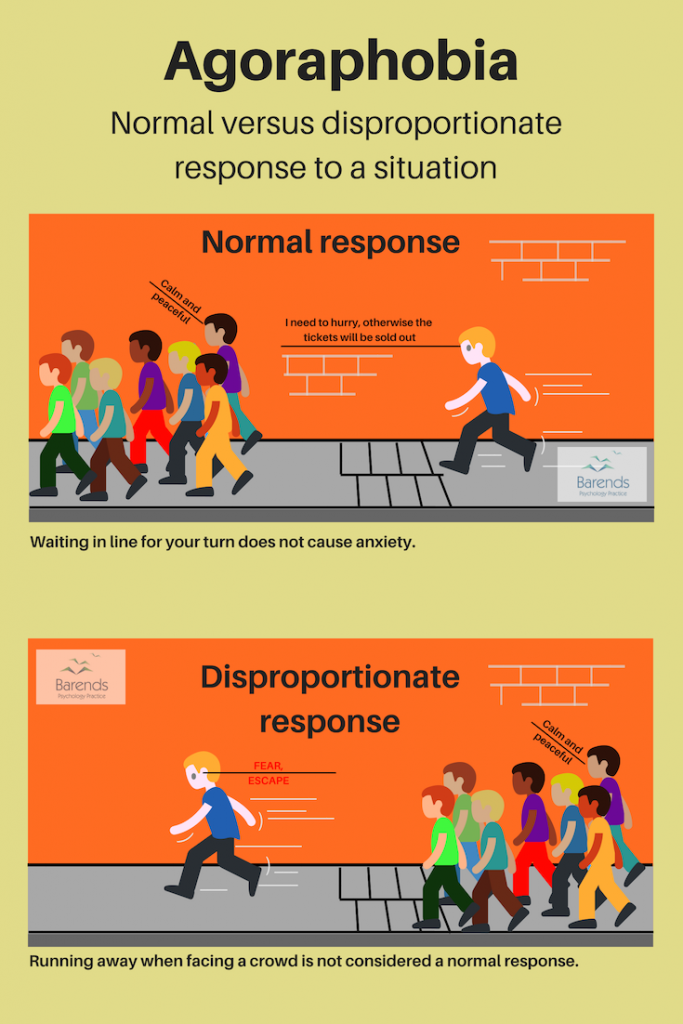 Criterion H focuses on medical conditions: If another medical condition such as inflammatory bowel disease or Parkinson’s disease is present, the fear, anxiety, or avoidance is clearly excessive.

Criterion I focuses on the presence of other mental disorder that could explain the above mentioned symptoms in a better way: The fear, anxiety, or avoidance is not better explained by the symptoms of another mental disorder, for example, the symptoms are not confined to specific phobia, situational type; do not involve only social situations as in social anxiety disorder; and are not related exclusively to obsessions as in obsessive-compulsive disorder (OCD), perceived effects of flaws in physical appearance as in body dysmorphic disorder (BDD), reminders of traumatic events as in posttraumatic stress disorder (PTSD), or fear of separation as in separation anxiety disorder.

Note: Agoraphobia is diagnosed irrespective of the presence of panic disorder. If an individual’s presentation meets criteria for panic disorder and Agoraphobia, both diagnosis should be assigned.