What are the causes of PTSD

Post-traumatic stress disorder (PTSD) is not a mental disorder someone is born with. In order to develop PTSD, someone needs to experience or witness a traumatic event. A traumatic event can be anything, ranging from being bullied to sexual assault, and from a car accident to being threatened by someone on social media. Experiencing a traumatic event is one of the causes of PTSD.

Fortunately, experiencing a traumatic event alone is not enough to develop PTSD. It is possible that two people experience the same car accident, but only one of them develops PTSD. It is likely that the person who develops post-traumatic stress disorder is more vulnerable to developing PTSD. On this page we will discuss the causes of PTSD.

There are two main factors contributing to the possible development of PTSD: environmental stressors and genetic vulnerability [1]. We’ll discuss each of the causes of PTSD below, as well as the risk factors and protective factors that help prevent PTSD to develop after experiencing a traumatic event.

At Barends Psychology Practice, we treat post-traumatic stress disorder online and in person. Book your first, free of charge, session now: contact us. (Depending on your health insurance, treatment may be reimbursed). 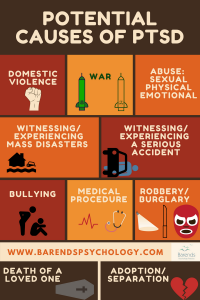 An environmental stressor could be anything someone experiences that is considered stressful. Some environmental stressors have a bigger impact on someone than other environmental stressors. And sometimes a stressor has a huge impact on person A, but not on person B. A difficult childbirth, for instance, can be traumatic to Mary, but a similar difficult childbirth may not be traumatic to Jane.
There are several reasons why one traumatic experience can result in PTSD in Mary but not in Jane. We’ll discuss them in each of the chapters below.
Examples of environmental stressors are childbirth [4], working in stressful environments, such as rescue and recovery workers and military personnel [5],[6], interpersonal violence, such as physical assault, sexual assault or emotional abuse [7],[8], accidents, natural disasters, life threatening illnesses or injuries, murder, and extreme human suffering [8].
Some traumatic events, such as accidents, sexual assault, and murder, cause acute stress and other PTSD related symptoms, whereas for other traumatic events, such as emotional abuse, the PTSD related symptoms may only occur after a period of time, sometimes years later. In the latter, the abuse is less obvious and the damage done to the victim accumulates over time.
Often, one single emotionally abusive event does not cause enough PTSD symptoms to meet the criteria for PTSD, but something as shocking as accidents, murder, and sexual abuse, do cause a lot of PTSD related symptoms immediately.
In other words: environmental stressors contribute to the development of post-traumatic stress disorder, and can be seen as one of the causes of PTSD. However, experiencing or witnessing a traumatic event alone is not enough to develop PTSD. There are other factors that affect the possible development of PTSD, such as genetics, risk factors, and protective facts. We’ll discuss these other protective factors and potential causes of PTSD below.
(Advertisement. For more information about causes of PTSD, continue reading.)

Next to the environmental stressors, genetic factors contribute to the vulnerability of the development of PTSD, but also to the exposure of potentially traumatic events [9]. The first finding may suggest that certain genes may have a negative impact on factors that protect someone from developing PTSD, and therefore make someone more vulnerable to the development of PTSD. It could also mean that certain genes have a negative influence on the way traumatic events are being processed in the brains.
The latter finding may suggest that certain genes negatively impact risk assessment or encourage risk taking behaviour. It is possible that someone is more often exposed to potentially traumatic events if that person has poor risk assessment skills, but also if that person likes risky behaviours.
Twin study estimates of PTSD heritability vary from 24 to 72% after a traumatic experience, and that women are two to three time as likely to develop PTSD [10],[11],[12],[13].
PTSD heritability estimates tells us that 24 to 72% of the variability in PTSD is due to differences in genes among people. This does not mean that 24 to 72% of the people develop PTSD after a experiencing or witnessing a traumatic event. It does tell us that 24 to 72% of the differences in genes among people contribute to the development of PTSD.
In other words:

Which risk factors contribute to the causes of PTSD?

No risk factor directly causes PTSD, but there are a few risk factors that indirectly increase the chance of developing PTSD.

Factors that can protect someone from developing PTSD are good coping skills, optimal adaptation [14], high levels of preparedness [15],[16], and social support [16],[17]. At the same time, minimal coping, low levels of preparedness, and poor social support increase the risk of developing PTSD. Troops who were well prepared before deployment perceived levels of threat that were correlated with levels of combat, whereas troops who were unprepared before employment perceived high levels of threat regardless combat exposure [15].
Rescue and recovery workers who had previous experience or disaster training were less likely to develop PTSD [5]. At the same time, workers who are longer exposed to the results of disasters or war, such as the World Trade Center disaster or the Vietnam war, are more likely to develop PTSD [5],[6]. This is in line with another study where police officers who experienced lower critical incident exposure less often developed PTSD [17].
Having positive world assumptions is another protective factor; assumption such as ‘the world is a good place’ help prevent the development of post-traumatic stress disorder after witnessing or experiencing a traumatic event [17].
(Advertisement. For more information, continue reading.)
Religious moral beliefs help protect against the development of PTSD and its symptoms as well [18]. The higher the score on the moral beliefs index the lower the PTSD-symptoms score. Additionally, religious moral beliefs enables veterans to better control distress. Exploring one’s spiritual needs and desires after a traumatic event could help protect one from developing PTSD.